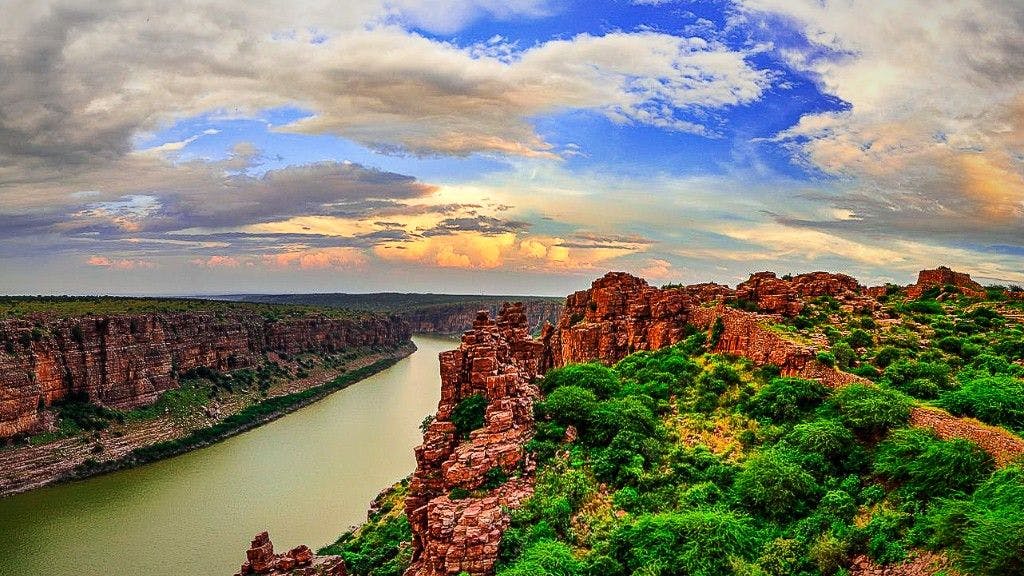 Gandikota: The Grand Canyon of India

Everyone is mesmerized by the beauty of the Grand Canyon in Arizona. But did you know that there is a gorge of spectacular beauty closer home?

The almost forgotten gorge of Gandikota is situated on the Pennar River in Andhra Pradesh and is known as the Grand Canyon of India.

A gorge is any valley formed by a source of water flowing between tall slabs of steep rocks. Gorges are formed as a result of erosion of rocks over a long period of time. In fact rivers cut through the rocks to form gorges over many centuries. It is difficult to imagine that the Pennar river in Gandikota could carve such a huge gorge but the continuous flow of its water eventually cut a deep trench through the landscape, exposing many layers of rock and creating the spectacular site we see today.

Formed between the Erramala range of hills, also known as Gandikota hills and the river Pennar that flows at its foot, the area is marked by deep valleys and massive boulders of granite.

– Rivers cut through the rocks to form gorges over many centuries

Geologist P.D. Sabale explains how the Gandikota canyon was formed. “The River Pennar cuts the Pink Granite, which forms the bed rock here. While it is not an easy process to cut an Igneous, acidic, very hard and compact mass of granite the natural decomposition of the rock, made it weather fast.”

The great canyon of Gandikota has also played an important role in Andhra history. The town played a significant role during the Kakatiya, Vijayanagara and Qutub Shahi periods. The Pemmasani Nayadus, who ruled over Gandikota for almost 300 years were commanders of the Vijayanagara army. The fort fell into hands of Qutubshahis of Golconda in 1650 CE.

The medieval fort of Gandikota which you can find here is named after the adjoining gorge; as the Telugu word for gorge is gandi.

– Gandikota has played an important part in Andhra history

The magnificent Gandikota fort, which was once famous for being one of the most impregnable strongholds of its time has remains of temples and a mosque and is today scattered with debris. The fort is built in such a way that the gorge provides a natural defence on its west and north sides.

The spectacular gorge and the Gandikota fort are a must visit!

If you enjoyed this article, you will love LHI Circle - your Digital Gateway to the Best of India's history and heritage. You can enjoy our virtual tours to the must-see sites across India, meet leading historians and best-selling authors, and enjoy tours of the top museums across the world. Join LHI Circle here